What is the connection between MSER's and sieves'?


Why call the family of feature finding algorithms sieves and not filters?

I thought it may be helpful to distinguish between two very different signal simplifying algorithms both of which preserve scale-space: linear 'filters' and non-linear 'sieves'. In a linear-filter-bank such as a bank of Gaussian filters the input signal is separated, prism like, into frequency related scale bands (large and small blobs). Like all linear filters they spread outliers such as impulses and sharp edges over many scales. Sieves do not - hence the distinction. Now Gaussian filters have a very attractive property, that it turns out, is shared with sieves ...

In the 1980's-1990's there were many publications on the properties of Gaussian (diffusion) filters. Key is that they preserve scale-space (Babaud et. al. 1986 "The uniqueness of the Gaussian kernel ...")<ref>Babaud, Jean; Witkin, Andrew P.; Baudin, Michel; Duda, Richard O., "Uniqueness of the Gaussian Kernel for Scale-Space Filtering," Pattern Analysis and Machine Intelligence, IEEE Transactions on , vol.PAMI-8, no.1, pp.26,33, Jan. 1986 doi: 10.1109/TPAMI.1986.4767749</ref> To understand what is meant: imagine a photo projected onto a wall using a data projector. Leave it on for an hour. Then turn of the projector. Regions that were illuminated (white) will be warmer than those that were black. Now turn the projector off and turn on an infrared image viewer. Once again the image will be visible (warm and cold regions showing up). However, as we wait heat will diffuse from the warm to cooler regions - the image will become blurred. Heat will never flow to form new extrema. If the thermal conductivity of the surface is uniform and isotropic then there is one simple filter that will produce the same result. A Gaussian blur filter.

Here, we have three panels illustrating one dimensional signals represented in scale space. I have used 'heat maps' to represent the signal intensity at each scale.

Left Panel. Here, a A low-pass siv4.m gradually removes extrema (from the signal shown above) as scale increases from scale 1 to scale 64. The resulting traces are shown as a 'heat map' where the signal goes from left to right, bright colours like red are large amplitude, small scale extrema. At each increasing scale (down the map) extrema have been removed. The 'm'-sieve preserves scale-space so no new extrema (light regions) are formed as we move to increasing scales. Moreover, the features do not wander about in scale-space. We could say that in one dimension we measure pulse length using a sieve just as we might use a ruler or measuring tape in the physical world.

(siv4_test code the code generates several Figures - the one above is Fig. 5.)

Right Panel, Babaud's original Figure showing heat-map 'isotherms'. (Actually, to be consistent with the other Panels I have flipped the image vertically.) The features wander about in scale-space and sharp edged features do not sharply disappear - they are smudged over scale-space.

One dimensional sieves are easily implemented by run-length coding the signal, each extremum has a list of just two neighbours. Indeed, in collaboration with CCL we implemented the algorithm on a PC board to characterise the output, in real time, from line-scan cameras (often used industrially when, in the early 1990's, 2D digital camera's were not easily available). Implementations for images in higher dimensions are similar but keeping track of lists of neighbours is a little more complex, but see Nister and Stewenius, <ref>D. Nister and H. Stewenius Linear time maximally stable extremal regions ECCV 2008 part II LNCS 5303 pp 183-196. </ref> for a cool implementation of the MSER algorithm. 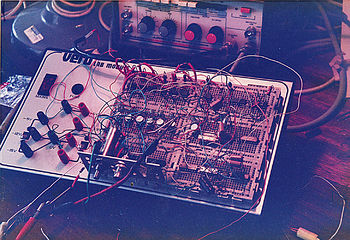 Dug up from the past. First hardware implementation of a sieve. Just a few stages. Later implementations used an application-specific integrated circuit (ASIC). We wanted a full decomposition at speed for the line-scan cameras.

Could non-linear filter banks (sieves) have evolved in biological systems?

Biological systems are too complex too huge to comprehend without some initial insights. In vision the particular theoretical 'torches' that light the experimental findings are the Fourier transform, Gaussian or Gabor filter banks. Is it possible that we look where those lights are shining and what we find seems to fit that intuition e.g. Gaussian/Gabor. Or perhaps has to fit for want of other torches'.

So care is needed. Science should be creative, we should create a number of torches pointing in different directions (based on different theoretical frameworks where possible) then use experimental evidence to reject those that do not fit. That will leaving us with the best hypothesis - theoretical framework, until it too is rejected. This is just science rhetoric of course.

We now know that sieves (MSER's) not only exist but offer significant practical advantages over other methods in computer vision. They are an alternative 'torch' that might need rejecting. Perhaps we should re-evaluate the biological evidence. Could the brain be understood in terms of sieves? Were this to be the case then it could change what we look for in brain structures. Hardware implementations of sieves are all about connectivity and relative thresholds as are brains, so perhaps it is possible.

Exploring this problem would be just the 'wild' opportunity that I have enjoyed exploring in my research life. It would be a wild ride whatever the outcome - unfortunately cancer now (June 2014) leaves me out of the game..

Summary of basic properties of sieves, linear and non-linear filters?